War Hammers, often identified with the Horseman's Pick, were military weapons often used the same was Maces and Flails were. Showing up around the late 13th/14th Centuries, the War Hammer looked exactly as it today...a hammer! Although slightly bigger than today's standard claw hammer, the War Hammer was attached to either a metal or wooden handle. Lengths varied according to the users needs, but examples have
been seen from 2 to 4 feet in length. Often cast in iron, the opposite end of the War Hammer had a curved bunted spike attached. Like all striking medieval weapons, the main goal was to inflict crushing injuries and blunt force trauma. The War Hammer could accomplish this easily. However, the spike end, while excellent at penetrating armor, found itself becoming stuck in the armor! As previously mentioned, it's cousin - the Horseman
Pick looked very similar in construction with one change. The hammer pick portion (head) of the weapon was mounted on a long polearm (6 to 8
feet being ideal). The goal was to hook onto the armor of knights, and pull them down. Given the time it took to mount a fully armored knight onto his horse, obviously the Pick was looked down upon! 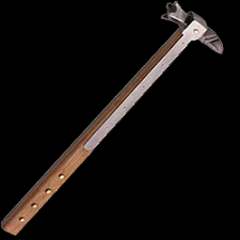