Evidence suggests that Elephants used in warfare may go back in combat use as far as 4,500 BC. These include The Indus Valley Cultures to include, Mesopotamia, Egypt, The North Middle East and South Asia. Elephants were seen as early forms of "Shock Troops" and "psychological warfare". With some breeds reaching up to 15,000-pounds in weight, large "Squadrons" were formed and trained. These forms of Soldiers were known as "Elephantry".

Elephants were taught to advance in groups of three. Their primary goal was to break through Enemy lines, and stomp or crush their Human adversaries. In addition, they used their tusks (often sharpened), to impale and Enemy. Often Bronze spiked sleeves were installed on their tusks to inflict more damage. Additionally, Elephants were trained to use their trunks to knock down an Enemy or to "unhorse" a Mounted Warrior.

Elephantry had a trainer and primary "Driver" called a "Mahout". They trained the animal in prescribed tactics. In addition, up to 3 Archers or Spearman were gathered in a type of "Basket Saddle", affixed to the top of the animal.This provided a type of minimal protection. Later, a type of enclosed "Turret" was used. In some cases, these structures were as tall as 12-feet tall (in addition to the normal Elephants height). In this configuration, Siege Crossbow and later small caliber Cannon  (such as The Zamburak Gun), was added.

The primary weakness of Elephantry was their exposed flanks and of course, trunks. Enemies concentrated their attacks on both. To compensate for this, many Nations and Kingdoms began to Armor their War Elephants. Long, Lamellar Skirts were applied to the flanks and head. Even trunks were some times armored. Another problems with Elephants was their ability to be scared and spooked easily. The slightest "strange or unaccustomed" noise could stampede a Section. Hard to control in this way, a Mahout often carried a poisoned Spear or Spike to "put down" the animal.

Males were always used as War Assets. Females could not be due to their inherent ability to run from Males as part of their Courtship ritual. Additionally, Males retained their aggressive nature in combat. Potential Candidates were caught in the wild. Domesticated breeding was entirely too difficult. Regardless of their flaws and shortcomings, War Elephants would hold sway on the battlefields of The Ancient World. They were used in some of History's most famous battles. In fact, their use would continue into the early 20th Century in some Countries. 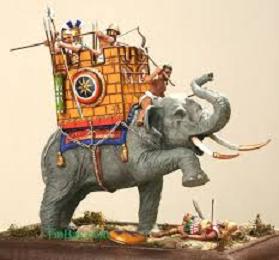