Another form of Greek War Shield, it was a "hybrid" type of self-protection component equipment, which borrowed from Ottoman military encounters during Greece's attempts to defend itself from The Ottoman Invasions. A combination of their basic Infantry Shield of the 9th Century, with captured Ottoman designs, it also bore some similarity to the Ancient Roman Scutum Shield.Due to it's weight (as much as 8-pounds), it was used by Heavy Infantry. Many soldiers no doubt "joked" at the fact that it resembled a door. The name stuck.....The "War Door". Slightly curved to afford a soldier the ability to crouch down, on this was their purpose, to be used as a "portable wall".

War Doors were 4 to 5 feet in length and 3.5 feet in width. A series of attached leather strap mounted on the Shield interior, allowed for what was deemed a "high carry" was incorporated. War Doors were made of wooden frames, reinforced with several iron plates. The War Door design was adopted by several European Nations from the 10th to 13th Centuries. They were abandoned for use around the 13th Century with the advent of primitive Firearms technology. 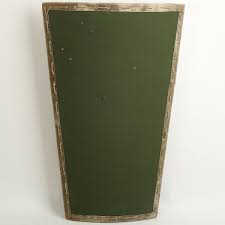