The standard Armor plating used by The Byzantine Empire evolved from battlefield “trials” over it's many centuries of existence. One of the first used was Kilvanian Armor (named for the Provence in present day Iran, from which it was developed). Used from the 7th Century A.D. To 1028 A.D. - Kilvanian Armor was iconic for it's large circular “plate” mounted on the front of the suit. This suit was composed of leather pieces (joined by rivets), which featured smaller Lamellar iron plates. As was typical (and showing the “link” to it'' Western Roman “Cousin” - Kilvanian Armor normally had the left sleeve designed with plain thick leather (in a Manica form). This allowed free range of motion with regards to horsemanship. Regarding the previously mentioned front plate, this too was of hammered iron or bronze plated circular construction (with as many as 5 smaller plates radiating from a center point, outward). This design was simple. It provided maximum protection to a Soldiers chest. This armor was very strong. It's drawback was it's weight. In some variations, the Lamellar plating was substituted with Chain Mail (with the Front Plate still used). This type of Kilvanian Armor was popular with Byzantine Archers and Calvary. 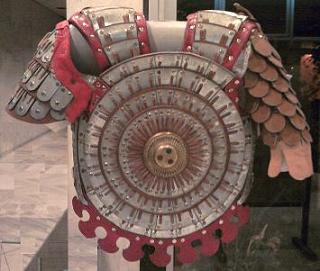