As we have seen, The Vietnamese of the 15th Century AD had mastered a ''Pellet''-style Crossbow called The No Ban Dan. Another form of their ''Pellet'' Weapons was The Dan Cung San Ban or simply ''Pellet Bow''. These were commonly used by both Mounted and Dismounted Archery Units (Ranged). The Bow, also of handcrafted Yew Wood, was a Recursive Style Bow which featured ''double'' sinew strings. Centered, was a type of ''finger basket'' similar to what could be found with a Modern Pellet Shot ''Hand Rocket''.

Into such a holder, shaped Stone, Glass or Metal Pellets could be loaded. Drawing back on the bow string like a traditional ranged weapon, The Archer could deploy His ''Missile'' to an astonishing 300-yards. This made The San Ban a very effective and deadly weapon. Variants could still be found in usage as late as the 19th Century AD. 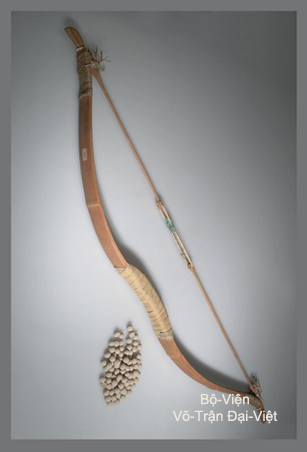