Another member of the Signifer Unit of The Roman Army. The duty of the Vexillarius was to carry the Standard or Vexillum of the Legion he was assigned to. The Vexillum was a cloth or fabric square or swallowtail emblem that had the Legion identifying number and name printed on it. Attached to a crossbar and mounted on a 6 to 8 foot wooden staff, it would be carried in front of the individual units (often times it would be seen with the other Signifer units as well). Normally, only a re-enlisted veteran was allowed to carry the Vexillum.

Often when groups of veterans were placed in the same unit, they would have their own "special" Vexillum carried in front of them. Considered elite they had no other duties in a Roman camp (other than normal combat). Often, Vexillarius were "cross-trained" in other specialties (medic, engineering or siege weapon operators). 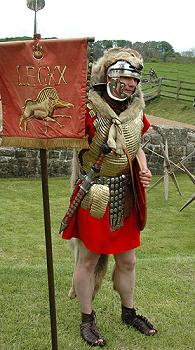