Rome was an adaptive Military. It generally learned from it’s exposure in War and Battle from Enemies, especially in their tactics and weapons. Another Iberian “borrowed” weapon, was The Verutim Spear. As a ranged weapon, The Verutum was carried in groups of 3 (normally attached to a Soldier’s Scutum – or Shield). The Verutum was light weight, weighing less than 1-pound. It was made of ridge wood and was roughlt 4 to 5-feet in length. The Spear Head was tapered into a fine point, with sharped sides. These Heads were affixed to The Shaft and measured around 5-inches. A Counterweight sleeve was affixed to the Shaft rear. This aided in proper stabilization in flight.

Seen in the late Republican and Early Imperial Era, The Verutum was deployed Iberian “fashion” with a tactic known as The “Cloud of Spears”. In this, many Front Line Legionaires would hurl their Verutum en masse. The resulting mass throw gave the appearance of a “cloud” of such Spears – coming down in an equally deadly effect. By the late Imperial Era, The Verutum was deployed more with Auxilia than with First Line Legions. Examples did survive into The Byzantine Empire. 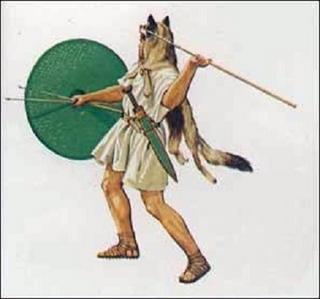