One of the “Volley” or multiple fire weapons innovated in the mid to late 19th Century, The Vandenburgh Gun was created by a former New York Militia Officer – General Origen Vandenburg. Based on the French Mitrailleuse weapons design of the 1850s, The Vandenburgh consisted of (85) .50 caliber barrels, housed in a brass cylinder. The cylinder component was mounted on a modified artillery carriage. Resembling an over-sized cannon piece, the weapon featured a breach screw plate. When properly secured, a twist crank would activate it's percussion activated ignition/firing system. The weapon only performed marginally in tests (due to misfires and fears of explosion). Vandenburgh (although Northern), had Southern sympathies. He sold several hundred of his guns (in secret) to The Confederacy in the early years of the War. The weapon was documented as having been deployed (and used) at Fort Fisher, South Carolina. 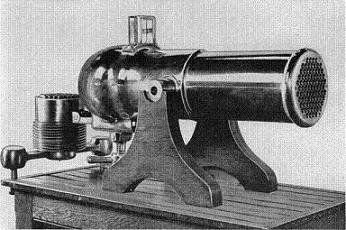