The USS ''Whitehead'' was a Union Coastal Gunboat launched in 1861 at the start of The American Civil War. She fought along The North Carolina Coast with A Federal Flotilla tasked with harassing Confederate Coastal Fortifications and Blockade Runners. Displacing 140-tons, ''Whitehead'' was 92-feet long with a Beam of 20-feet. She was a basic Steam powered Vessel, capable of 9-mph on open Seas. Crewed by (20), Her armament included (1) 30-Pounder Parrott Gun.

In 1863, ''Whitehead'' was re-assigned to The Roanoke River Squadron (Virginia). She would serve a similar purpose as before. After The War in 1865, “”Whitehead'' was sold. She would continue as a Merchant and Cargo Ship until 1872, when she was broken up for scrap. 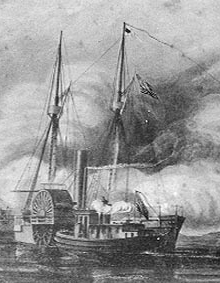