The USS “Thresher”, was one of the first Nuclear Powered Submarines deployed by The US Navy. Named for the species of Shark, The “Thresher” was designed to be the principle Attack Submarine for use against it’s then Soviet counterparts. Built in 1958 and launched in 1961, The “Thresher” was 3,540-tons submerged. She was 280-feet long and was 34-feey tall. Although her Nuclear reactor was “Classified”, she used a Westinghouse S5W Geared series of Turbines. She could achieve 40-mph submerged. Crewed by 129 Men, The “Thresher” was armed with (4) 21-inch Torpedoes.

Conducting Depth Tests with Surface Ships in attendance in April of 1963, The “Thresher” made several low-level dives without incident. It was her first “deep” Dive in which problems developed. Surface Ships recorded several garbled Radio Calls. It soon became apparent that The “Thresher” had sunk far past her maximum depth rating. She was declared lost the next day, will all her Crew. Her wreck was investigated several times. It was determined several incidents occurred  (both of which were catastrophic). Neither was related to her Nuclear Reactor. The first issue was with her construction. Rather than being traditionally wielded , she was joined by Silver Brazing. At untested depths, her joints may have given way, causing massive flooding.

Next, “Thresher” may have had pump and blast failure. Her ballast system could have been effected by ice blockage due to the depths of The North Atlantic . With her vents clogged to even stabilize at least 1 air tight compartment, coupled with a rapidly filling Vessel – The water weight would have drug The “Thresher” downward  (Tail first). At roughly 2000-feet, “Thresher” would have imploded  (which she did). All Crewmen were lost. Currently resting over 8,000-feet deep, she is still considered “On Eternal Patrol” and identified as a Military Grave Site. Last surveyed in 1985, it was determined that The “Thresher” reactors are intact and her Nuclear Fuel Rods undamaged. Due to the depth, they were not recovered. 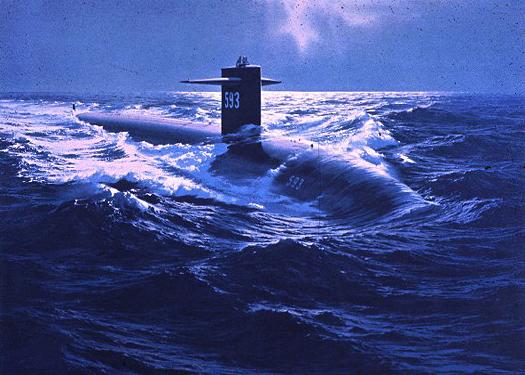