Having the distinction of being the only US Naval Warship you experience a “near” Mutiny, The USS “Somers” was a Brigantine Class American Warship. She was built and launched in 1842. She was 260-tons displaced and was 100-feet long. “Somers” stood 25-feet tall and was crewed by 193 Men. Her armament was a basic  (10) 35-pound Cannon. Designed to be a Navigational Training Ship, she was sent to The Caribbean. Her infamy began in November of 1842, when members of her Crew decided to make plans to Mutiny and commandeer The “Somers”. Their goal was to use her first Piracy. The Mutineers damaged the Rigging of The Ship – forcing her to stop at Sea. However, their plans were thwarted by loyal Crewmen. The 10 Mutineers confessed and were tried and hung. The USS “Somers” was redeployed to The Atlantic Squadron until the start of The Mexican-American War. She was sent to Blockade The Gulf of Mexico, under command of future Confederate Naval Officer and Commander of the famed CSS “Alabama”, Raphael Semmes. The USS “Somers” was lost in a Hurricane in 1846. The majority of her Crew were rescued. Although her Mutiny did not technically occur, she is still considered the only US Warship to experience one. 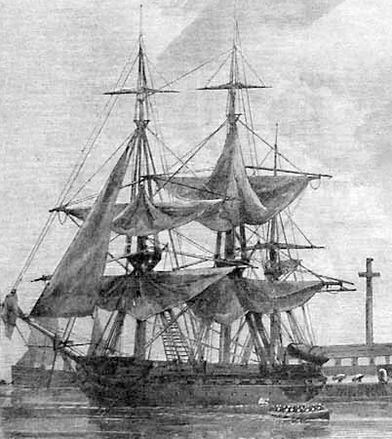