An ''Omaha'' Class Light Destroyer, The USS ''Raleigh” (named for The City of Raleigh, North Carolina/US), was deployed in 1922. She was instrumental as a “Support Ship” for The US Army Air Corps. Mission to circumnavigate The World. In 1936, She was part of The American Force Squadron that operated near Spain during their Civil War (until 1938). Throughout the late 1920s, ''Raleigh” operated in The Caribbean. She was deployed with The Pacific Fleet in 1939 and was sent to Pearl Harbor, Hawaii. The “Raleigh” was present in The Harbor during The Japanese Attack on December 7th 1941. She was hit by a Torpedo which began to cause Her to capsize. Her Crew jettisoned any and all top weight, keeping her afloat. The “Raleigh” still fired upon The Japanese during The Raid. None of her Crew were killed. She was repaired and assigned to Action in World War II.

“Raleigh” was 7,000-Tons displaced. She was 556-feet long and stood (Beam) at 60-feet. Propelled by (4) Steam Turbines, She could achieve 40-mph in open Seas. She Crewed nearly 450-Men. The ''Raleigh” was armed with (2) 6-Inch Main Guns, (4) .50 Cal. AA Guns (2) 21-Inch Torpedoes and could support (224) Anti-Ship Mines. The “Raleigh” was sent back to patrol the San Francisco Bat Area in case of Japanese Submarine attack. Later She served in The Aleutian Island Campaign (1943-45). After The War, She was sent back to The East Coast of The United States, and served as a Training Ship. “Raleigh” was decommissioned in 1946 and sold for scrap. 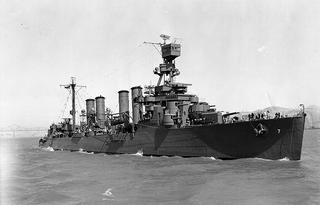