The USS ''Pueblo'' is a ''Banner''-Class Environmental Research Ship, which was assigned to NSA-CIA Surveillance Duties in 1967. Built in 1944 toward the end of World War II as a US Army Freight and Passenger Ship, it was transferred to The US Navy in 1964 (after a period of inactivity). Refitted with then State of The Art electronic monitoring devices, ''Pueblo'' was sent to The Southeast Asian during The Vietnam War (1965-1975).

Claiming to be operating in ''International Waters'' of The Coast of North Korea in 1968 – ''Pueblo'' was boarded by North Korean Naval Forces and taken by force into North Korean waters. This was a period of time in which – in addition of The ''Cold War'' with Soviet Russia and China, The North Korean Government escalated hostile actions against US Forces not only in Korea (DMZ), but in the air and at Sea. Hoping to initiate another War, Soviet and Chinese Governments would eventually argue that they would not support the aggressive nature of their Southwest Asian partner. The event known as ''The Pueblo Incident'' was a pinnacle point during these actions.

On January 23, 1968 (76) Officers and Men were approached and later chased by multiple North Korean Torpedo Boats, a Midget Submarine and an overflight of several MIG Fighters. Fired upon, The Crew was and Ship was taken ''hostage''. The Crew (one Sailor was killed during the attack) was kept prisoner by North Korean Military Forces for nearly 1 year (tortured for relative intelligence information). Only after The United States ''admitted'' that The ''Pueblo'' was in fact ''spying'' (both verbally and in writing), was The Crew released.

The ''Pueblo'' however itself – was not. Seen as a valuable ''War Trophy'' by The North Koreans, to this day, ''Pueblo'' is still docked in North Korea as a ''Museum Ship''. In the 1970s, several attempts to secure it's return to US Custody, without success. It is still considered on ''Active Duty'' by The US Navy.

The ''Banner''-Class Ship is 177-feet in length with a beam of 32-feet. She displaces 550-tons and is powered by Twin 500-HP Cleveland Diesel Engines.''Pueblo'' could achieve 15-mph in open Sea. The only known self-defense weaponry was (2) .50 Caliber Browning Deck Machine Guns. 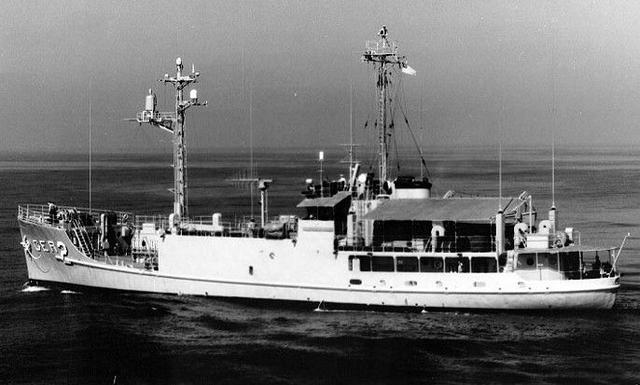