The namesake of The "Pennsylvania"-Class of Super Dreadnoughts, USS "Pennsylvania" was launched in 1915, as one of the first all Diesel powered US Warships (with limited Steam abilities). She displaced 32,000-tons and was 608-feet long. Standing 100-feet tall (Beam), she featured armor plating from 3 to 16-inches throughout. Crewed by over 1,300 men - "Pennsylvania" arrived on The East Coast of America (from The West), on the day World War I was declared. It was decided that only Steam vessels would be deployed to Europe. She was assigned at first to Coastal Defense duties and later as US Presidential "Honor Guard Ship". She was part of the Convoy that escorted President Wilson to France.

After The War, "Pennsylvania" was assigned to The Caribbean Squadron and later in the 1920s, to The Pacific Squadron  (California). She would go to Pearl Harbor in 1940. She spent the year (1940-1941), in Harbor Drydock for refitting. At the start of The Attack on Pearl Harbor on Dec 7th 1941 - it was "Pennsylvania" who fired the first US shots at The Japanese. Unable to Torpedo her, they tried successively to bomb her with conventional munitions. Largely unsuccessful, "Pennsylvania" was heavily staffed by repeated waves of Enemy Fighters.

Setting to Sea on 1942, "Pennsylvania" participated in most of The Campaigns for The Philippine and Mariana Islands. She earned the odd nicknamed "Old Falling Apart", for her "appearance" during The Mariana Campaign. Firing so much continual ammunition non-stop, the expelled she'll casings flying thru the air - gave the look that "Pennsylvania" was indeed "falling apart". "Pennsylvania" earned her place in History as being the only Vessel in Naval warfare to have fired 1 Million rounds (1942-44). Unfortunately, she was fatally hit by a Japanese Torpedo in 1944. Still, she made it home under her own power. Determined to be incapable of repair, she was patched and sent to The Bikini Atoll in The South Pacific as a "Test Ship" to study the effects of the first Atomic Bomb detonation (in preparation for Hiroshima). Studied for many years, in 1947, "Pennsylvania" was scuttled "with Honor". 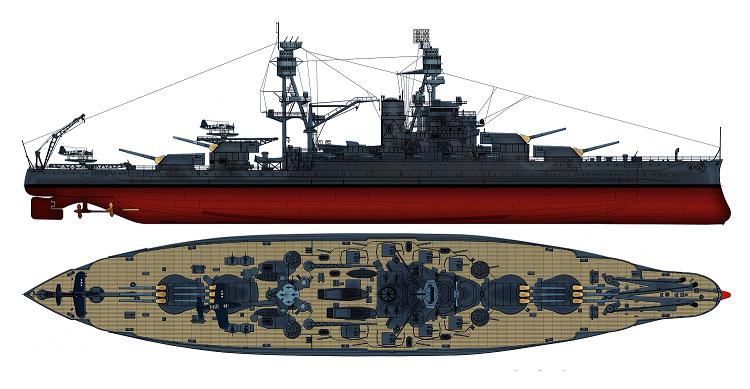