Traditionally, various Classes of US Naval Warships and related Support Vessels are not named. Rather they are identified by numerical designators. During World War II, The US Navy deployed a series of ''PC'' (Patrol Craft) Ships – purposed to specifically seek out (hunt), engage and destroy Enemy Submarines. The USS ''PC-815'' was one such Warship. Initially, ''PC''s were based on the first version devised early in the 20th Century, The ''PC-461'' – Class, seen in limited use against The Imperial German Navy during World War I. The vast majority of ''PC-815s'' (as were others of Her Class) – service was confined to both The East and Western Coasts of The United States (protecting against Japanese and German incursions against Shipping).

Deployed off The California Coast and ranging as far as Washington State, ''PC-815'' was launched in 1943. Her claim to fame is both famed (to a degree) and infamous (to a fact). Her first Captain was none other than quirky Sci-Fi Writer (and later Founder of Scientology) – L. Ron Hubbard. Submarine ''Chasers'' (as they were known) could be commanded by Junior Naval Officers. Hubbard commanded ''PC-815'' for roughly 3-months. Hubbard ''claimed'' to have sunk a Japanese Submarine attempting to commence operations off The Coast of Oregon. The ''claim'' was (and still is) debated as if He did or not to this day. After several other questionable actions, Hubbard would be removed from command (1944). In 1945, ''PC-815'' was involved in a collision with another US Warship in The Port of San Diego, California. Dense fog and perhaps ''poor Seamanship;; resulted in the accident which caused an uncontrolled fire which totally destroyed The Ship. Determined to be expensive to repair (and gving that The War was ending), The US Navy scuttled ''PC-815'' off The Coast of California. ''She'' is still visited today by Divers as a now Natural Reef. 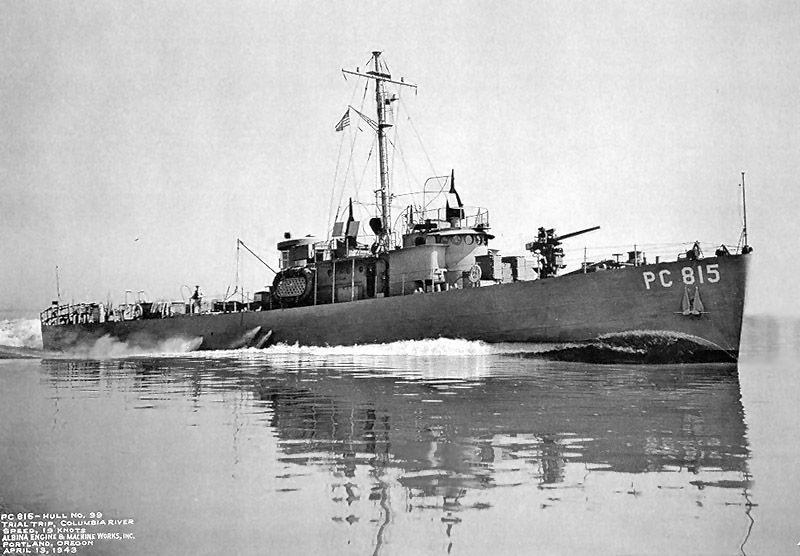