Named after her classification of US Navy Ships, the USS “Niagara” was one of the first ships constructed for “The Lake Erie Fleet”. Lake Erie (Ohio) was part of the lower Great Lakes Systems of North America. A tributary connecting with Canada – was an exploited English Royal Navy target during The War of 1812. A fleet of Brigantines were built by The US to counter and British invasion plans from those locations. Launched in 1813, she was assigned to The Lake Erie Fleet. During The Battle of Lake Erie (1813), Commodore Oliver Perry transferred his command from his damaged Flagship “Lawrence” to the “Niagara”. She displaces almost 300 tons and sits 33 feet high (beam). “Niagara” sets over 13,000 square feet of canvas (sail). She was equipped with (18) 32-pounders and (2) 12-pounder guns. She crewed 155 Officers and Men. Carefully restored over the centuries, USS “Niagara” is one of the last American Naval War of 1812 vessel left. She is currently a Museum Ship in Philadelphia. 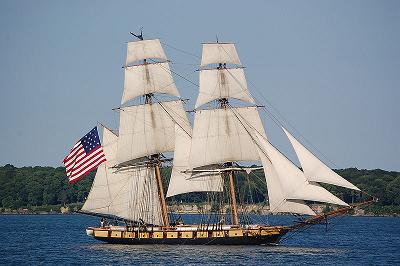