Named for The American Civil War Battle of Monocacy in 1864, The USS ''Monocacy'' was launched after The War in 1865. A steel constructed Gunboat, ''Monocacy'' was deployed with The Pacific Asiatic Fleet in 1866 and visited Japan shortly thereafter. The ''Monocacy'' was 265-feet long and displaced over 1,000-tons. She stood (Beam) at close to 40-feet. Crewed by 159 Officers and Men, ''Monocacy'' was armed with (6) cannon, ranging from 18 to 32-inches. Steam propelled, she could make a top speed of 11-knots.

''Monocacy'' found several marks in History. Her first, was as part of an invasion Force which attacked Korean Coastal Batteries during The Korean Expedition of 1871. She supported US Naval and Marine landings in that action. Later, ''Monocacy'' supported The China Relief Expedition during The Boxer Rebellion of 1900 in China.

Her second claim to History was that by 1903, ''Monocacy'' was the longest serving Post Civil War Era Gunboat still commissioned to active US Navy service. So old, she was nicknamed ''The Rickshaw of The Fleet''. ''Monocacy'' was finally sold in 1903 to Japan and was broken up. 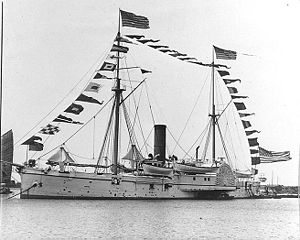