The US Navy ''Summer''-Class Destroyer USS ''Maddox'' was a late World War II Aircraft Carrier Screener, first deployed in 1944. She supported the final push by allied Naval Forces in The Pacific Ocean Theater of The War, and participated in The Okinawa Campaign. ''Maddox'' was hit by a Japanese ''Kamikaze'' and seriously damaged, She would be sent back to The US for repairs but The War ended before She saw any more service. Later, during The Korean War of 1951-1953, ''Maddox'' participated in The Blockage of Wonsan Harbor. After that Conflict, ''Maddox'' alternated between Hawaii and Long Beach, California, before being tasked in support of an Expedition into international waters off Southeast Asia. The ''Maddox'' would become part of the rather controversial History of American involvement in The Vietnam War. It was in 1964, near The Gulf of Tonkin, that ''Maddox'' claimed She was attacked by North Vietnamese Torpedo Boats. As of result of this, US President LB Johnson authorized Military support for The South Vietnamese Government – thus ushering in The Vietnam War of 1965-1975. 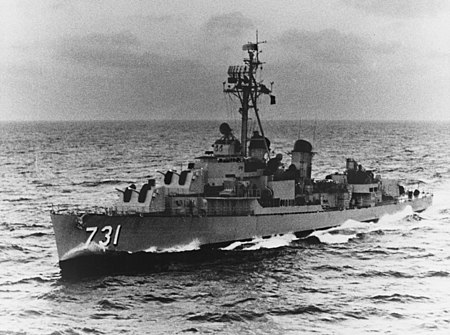