One of the “last” Casemate Ironclads built, USS “Dunderberg” (Swiss for “Thunder Mountain”), was originally a larger version of the CSS “Virginia” (aka The “Merrimack” of Hampton Roads fame). The Union Navy “appreciated” the designs incorporated into her, so they commissioned their own. Work and funding was slow (as The Civil War was winding down). Although commissioned as a US Warship, she saw no active service. As the US Navy began to switch away from Ironclad ship building, the USS “Dunderberg” was sold to The French Government in 1867. Re-named The “Rochambeau”, she was renovated with additional current technology. By this time she displaced some 8,000 tons and was almost 400 feet long. She was around 72-feet tall (beam). Capable of speeds up to 15 miles per hour, she featured 6 Turbine boilers and Twin-Back Acting Steam Engines. She was also fitted with Twin Masts (for wind propulsion, if needed). She was armed with 16 cannon and related guns (including 4 10-inch cannon). “Rochambeau” was fitted with 5-inch armor plating through he structure. Originally, she included an Iron Ramming Spar (but this was removed). Crewed with 600 Officers and Men, she was to take part in The Franco-Prussian War, but this deployment never occurred. She was decommissioned and scrapped in 1874. 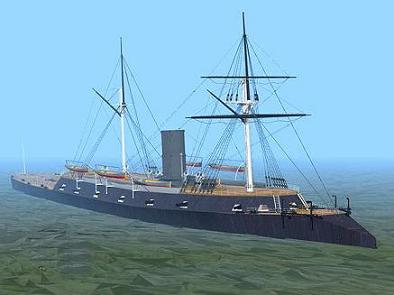