A privately owned and built Steam Paddle Wheel Vessel, ''Delaware'' was built in 1860 (under the name ''Edenton''). She was a wooden Ship, reinforced internally with iron piping and was envisioned to cash in on the Cargo and Passenger trade along The North Carolina Coat. A business dispute between partners caused her to be seized under Court Authority. At the start of The American Civil War of 1861, She would be purchased by The Federal Navy and re-named USS ''Delaware''. She was reconfigured as a Gunship and was assigned to The North Atlantic Blockade Squadron.

''Delaware'' was used to harass Confederate Fortifications from Virginia to North Carolina for most of The War. She captured (4) Rebel Ships during Her Career. After The War, ''Delaware'' was given to The US Revenue Service (later Coast Guard) as a ''Cutter''. She would serve in this capacity for almost 40 years. Decommissioned in 1902, She would be sold in 1919. Records do not indicate Her ultimate fate. 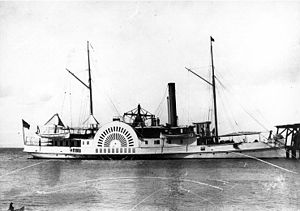