The “Congress” was one of the 6 “original” ships constructed by the young United States which at one time constituted her Naval Forces. A Frigate by classification, “Congress” was a 3-Masted vessel. Equipped with 38-guns (20 of which were 20-Pounders), she was 165 feet long and had a beam of 40 feet. She displaced over 1,200 tons in the water. She could crew up to 340 Officers and men. Laid down in 1799, USS “Congress” was first dispatched to participate in “The Quasi War” against France. She also served against The Barbary Pirates (preying on US interests) – in The Atlantic. During The War of 1812 (against England), she and her sister ship – USS “President”, worked in tandem against British Commerce and Warships (taking many “prizes”). In 1815, The Barbary Pirates “flared” up yet again and “Congress” was dispatched to the region. “Congress” included a unique “scaling” with regards to her Hull construction. By laying wood in a criss-cross pattern and applying an addition wooden overlay - “Congress” Hull was several feet thick. After the War of 1812, “Congress” was sent to The Caribbean (and later Pacific Ocean). She served as an “Observer” for many smaller revolts and rebellions against Spain (Colonies). In the 1820s, “Congress” served as a transport vessel for captured Pirates. Ported in Norfolk, Virginia – it was determined in 1834 that she was unfit and the cost required to completely retrofit her would be too much. She was broken up (although future ships would bear the name “Congress” throughout the later 19th Century). 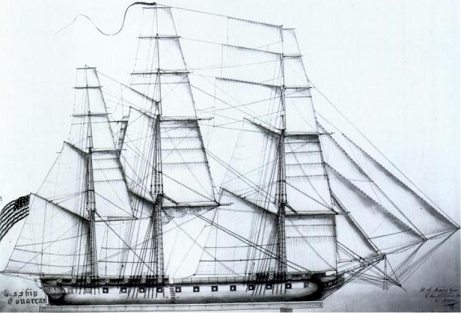