The USS ''Arkansas'' was a ''Wyoming'' – Class Battleship of The US Navy. Launched in 1911, She would serve in both World Wars I and II. After Her commissioning, ''Arkansas'' was attached to The British Grand Fleet as a ''Goodwill Ship''. She saw no active Combat and was primarily a Training and Coastal Protection Vessel. In The Interium Period, ''Arkansas'' served a variety of peacetime missions in The Southern Atlantic and off The Eastern Coast of The United States. With American involvement of World War II (1941), She was deployed to protect the Coast of Ireland and later saw operation around The Italian Coast. In the last year of the War (1945), ''Arkansas'' participated in the Battle of Iwo Jima (South Pacific). The ''Arkansas'' earned (4) Battle Citations for Her actions in Combat. Aged and no longer viable, ''Arkansas'' (with other American Vessels), was used in an atomic Test (''Operation Crossroads'') off The Bikini Atoll in The South Pacific. The Test was used to determine the effects of an Atomic Blast on Warships located at various stages of detonation (distance). As a result, She was sunk in 1946. ''Arkansas'' displaced 27,000-tons and was 560-feet in length. Her Beam stood 94-feet. Her Armor plating was rated from 1.5 to 12-inches throughout. Power was provided from (12) Boilers and (4) Steam Turbines. Rated speed was to 24-mph. Crew Compliment was listed as over 1,000 Officers and Men. Her armament included – (12) 12-inch Main Guns, (21) 5-inch Guns, (3) 47mm Guns and the ability to support (2) 21-inch Torpedoes. ''Arkansas'' could also support several Models of Float Planes (Observation and Patrol). 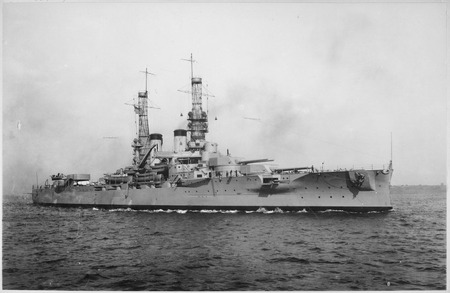