The "Pennsylvania"-Class USS "Arizona", was one of the last of The Dreadnought vessels used by The US Navy. Commissioned for construction in 1910 and completed in 1913, she was not deployed in World War I. "Arizona" served as one of US President Woodrow Wilson's "reactionary" responses to The Turkish Civil War. "Arizona" displaced 30,000-tons and was 670-feet long. She stood 30-feet (Beam). Using 12-boilers to power her 4 Parsons Turbine Engines, she was capable of 24-mph, "Arizona" had a 9,200-mile range. Her armament included (4) 14-inch Main Guns, (21) 5-inch Guns, (4) .50 Cal. Anti-Aircraft Guns and (2) 21-inch Torpedoes. She could also carry a variety of Biplane Reconnaissance Aircraft (up to two), catapult launched from the top of the Rear Main Gun Turret.

"Arizona" also featured heavy armored plating that ranged from 8 to 18-inches, which ranged from her hull to super structures. Assigned to The Pacific Fleet in 1940, The Fleet was originally stationed at San Diego, California - but was re-deployed to Pearl Harbor, Hawaii in the same year. This move was seen as a counter to Japan's aggressive activities in The Far East.

"Arizona's" fame, came in her tragic demise. At 7:55 AM, on December 7, 1941 - The Imperial Japanese Navy launched an attack against US Naval assets at Pearl Harbor. "Arizona" was targeted by no less that (4) 500 to 1,000-pound ariel Bombs. Still surviving, at 8:06 AM, a direct hit by an armor-piercing, 1,700-pound bomb to her powder magazine, immediately blew "Arizona" apart. Over 1,177 of her 2,900 compliment were immediately killed. She sunk to the bottom of the Harbor, but due to her berthing, much of her super structure still remained above water. Due the massive destruction, it was determined to leave her deceased crew entombed. Her super structure and surviving Main Gun Turrets were salvaged.

Officially declared a National Monument in 1962, The USS "Arizona" is still visited by thousands of Tourists each year. Although decommissioned by The US Navy in 1942, "Arizona" is the only US Ship, still considered "On Duty" despite her "status", and full "Passing Honors" are rendered to her wreck when any US Combat vessel is required to pass her. 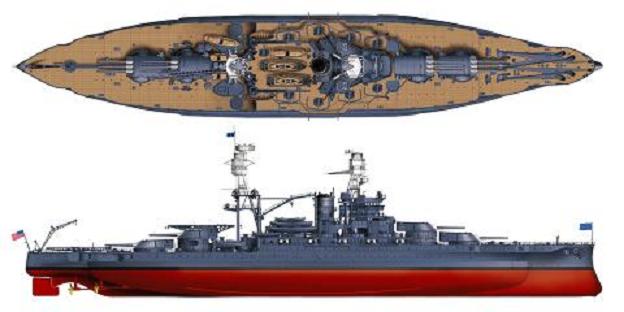