Considered one of The United States Navy's first "submersibles", the USS "Alligator" was commissioned in 1861 and launched in 1862. Originally met with resistance from many senior Naval Officers as to it's effectiveness, it took US President Abraham Lincoln to push for final sea trials. The "Alligator" was 275 tons displaced and 47 feet long. She sat 5 feet tall and wad capable of submersing to 8 feet. Propulsion was accomplished by a central hand crank propeller. As a "back up", 16 hand oars could be used. 1 Officer and 13 men made up the crew. The "Alligator" was equipped with 2 Limpet-Class Naval Mines. Constructed put of iron plating, it was hoped that The "Alligator" would harass Confederate shipping. Assigned to patrol off the coast of Virginia, the first  mission of The "Alligator", was to be her last. Before she could deploy, a severe storm hit the coast. "Alligator" took on too much water and had to be abandoned. All crewmen were saved - but The "Alligator" went down. 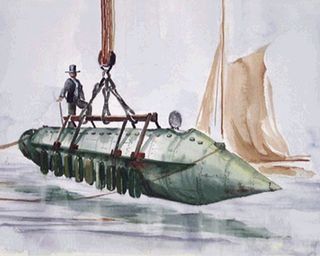