The USS ''Admiralty Islands'' was a ''Casablanca'' – Class Carrier Escort Warship, first launched in 1944 (late in World War II). Part of The Northern Pacific Squadron, ''Admiralty Islands'' would fight an isolated and ill-supported Campaign of The Coast of New Guinea (1944), Her heroism in battle would earn Her 3 Naval Battle Stars. She would also support Operations against Iwo Jima and Okinawa at the end of The War. She would serve as a Major Transport for returning American Servicemen returning from The Pacific Theater in 1945. She would be decommissioned in 1946 and scrapped in 1947. The ''Admiralty Islands'' displaced 10,000-tons and was 512-feet long. Her Bean stood at 108-feet. Her power came from (4) Boilers and Twin Steam Engines. She was rated to 22-mph. She supported 900 Officers and Men. ''Admiralty Islands'' could support a complete Naval Fighter Squadron from her Flight Deck. Her Armament included – (1) 5-inch Gun, (8) 40mm AA guns, (12) 20mm Guns and (30) 1-inch Guns. 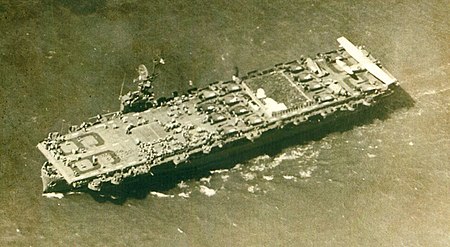