A recently created Medal in current use by The United States Air Force, The Remote Combat Effects Campaign Medal is awarded to those Air Force Personnel who fly (control remotely), UAV Drones (Unmanned Aerial Vehicles), having deployed such in actual Combat Missions against an Enemy or in Operations. The criteria states that One must be located ''outside'' a declared Conflict Region or Combat Theater, while commencing such operations. Both actual non-destructive operations (surveillance) and actual munitions deployment and detonation qualify for award. Only (1) such Mission need be completed for award, which is recommended from Divisional Level. Multiple awards are identified by Campaign Star Devices, attached to The Ribbon.

The Device is Circular Gold in color. The engraved image of a stylized Earth features The WWII United States Army Air Corps. (and later US Air Force) Insignia of ''spread'' Wings with a Roundel (Circle) and 5-pointed Star. None of this imagery is in color. An Arrow cuts through The Insignia to impart that The Controller has the ability to ''strike anywhere in The World''. The Ribbon is ''Air Force Blue'' in entirety, with a lighter Blue central Stripe, flanked by smaller White ones. 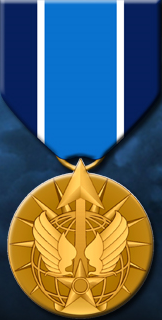