The development of a Parachutist Badge to be worn by qualified US Air Force Airmen, was born out of the specialized need for Airmen to have specialized combat training. This began in World War II (1941), when then United States Army Air Corpsmen (the forerunner of The US Air Force), were under constant threat of German Invasion on Air Bases throughout England. Such training in Airborne Deployment was seen as critical (as was other traditional Infantry Combat Training). The US Air Force did not at the time award any devices that recognized such training. The US Air Force would be created in 1947 as a separate Service and as such, Awards were so created.

In 1956, a series of Air Force Parachutist Badges were created for use by qualified Airmen. Made of Blue, White and Silver colored enamel, (3) separate Qualification levels were created. These were Basic, Advanced and Master. The Badge was a Shield shaped pattern, which had a series of White Clouds (bottom), with a deployed Silver Parachute centered. Advanced and Master Versions were awarded a Silver 5-pointed Star (Advanced) or Star with Scroll (Master).

Worn on both The Dress and Fatigue Uniform, The USAF Parachutist Badge would be used until 1963. Training (from 1956 forward), was performed at The US Army Airborne School at Fort Benning, Georgia. As such, all Graduates – regardless of Service Branch that attended, were awarded The Army ''Silver Wings''. It was determined to adopt them as official wear for The USAF. The former Badge was obsolete with The Army Version issued thereafter (as is still done today for those Airmen who are required to undergo Airborne Training as part of their Occupational Service Skill). 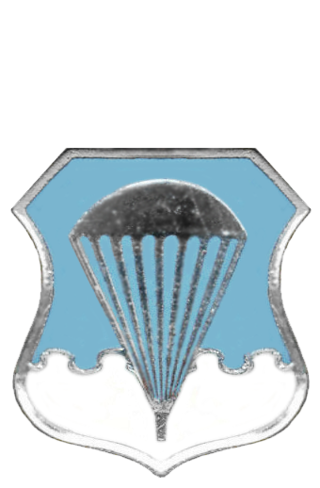