The Special Operations Unit of The US Air Force is known as The 1st Special Operations Wing. Their birth (during The Vietnam War), gave them the romantic name of “Air Commandos”. The term today is used to include a variety of specialized Combat Ground and Air Support Units currently deployed in The US Air Force. As early as 1964 in Southeast Asia, the tasks of maintaining the security and safety of Air Force Ground Assets was seen as tantamount. Fears of espionage and sabotage from Enemy Forces made the need for such security. Specially selected Airmen were chosen to be trained in small Unit tactics and defensive/offensive measures. These “Air Commandos” received training similar to The US Army Special Forces and US Army Rangers. They received the local moniker of “Jungle Jims”. They worn basic combat patrol uniforms and used standard infantry weapons. They not only protected an Air Base – but conducted shirt range patrols around such installations.

Later, The Air Commandos were used to retrieve downed Pilots and the securing of Assets. After The War, the need for specialized Combat Units were ceased, with the creation of Sensitive Asset Recovery Teams (Nuclear) and The Pararescue Command. The Command (which currently consists of Fighter and Support Commands), can deploy anywhere in the World. They are based in The State of Florida. 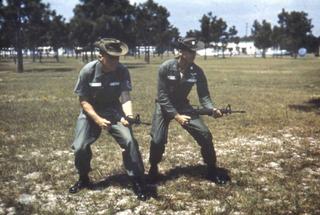