First deployed in 1942, The Vought manufactured Fighter, nicknamed The "Corsair", was a highly maneuverable and capable Aircraft. It wad so reliable in fact, The "Corsair" Fighter  was the longest Piston Engine Fighter produced in The US - running until 1953. Primarily deployed as the principle Fighter used by Aircraft Carrier Attack Squadrons, they could be converted into both Fighter and Bomber configurations. Over 13,000 were produced during World War II alone.

Armament depended on the deployment need of The "Corsair". Typically, the Fighter was armed with .50 Caliber wing mounted Machine Guns (3 each wing). Each Gun carried 400-rounds each. Other armament patterns included (4) 20mm Wing Cannon or a Underwing Rocket System capable of (4) 5-inch High Velocity Types. The F4U could carry up to 2,000-pounds of varying munitions. There were 20 variants in the Service life of The F4U. Even well into "The Jet Age", The "Corsair" was a popular Fighter in The Korean War of the early 1950s. The last "official" F4U was in the Honduran Air Force in 1979. 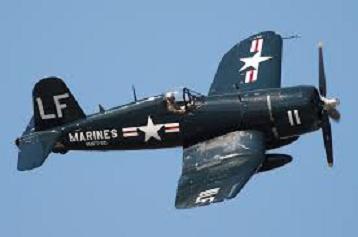