First flown in 1917, The Thomas-Morse S4 was a development of a joint production between a British and American Company. Based on The Curtis-Jenny Fighter/Trainer Plane, The S4 was first issued to The US Army Signal Corps. as a Reconnaissance plane. Never deployed to Europe on World War One, The S4 was a less successful Trainer for new Pilots. Nicknamed "Tommy", it was a single-seat,  19 foot aircraft with a 26 foot wingspan. Only capable of 97 mph air speed, The S4 would eventually go onto a successful series of careers in both Film Production (Movies) and the once popular Air Races in the 1920s. 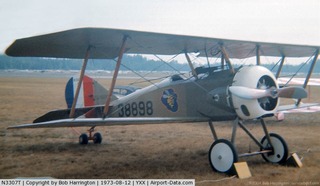