Nicknamed The “Whizbang”, for the distinctive noise made when it’s Rockets fired, The T-40 was a modified Rocket Launching platform, attached to The US M-4 “Sherman” Tank. The Main Turret and Gun were left in place. The platform was a steel brace box, affixed by extension bars – which extended the platform some 4-feet above the Turret. When not deployed for firing, the platform was “flat” (when firing, angled). The Rockets were electrically launched from inside The M-4. First deployed in 1944, The T-40 weighed 84,000-pounds and was 17-feet long. The width of the platform was 8-feet wide. The Rocket “Box” held  (20) 7.2-inch 180mm chemical fueled Rockets. The maximum effective range of The T-40 was 3,100-feet. It's somewhat unique mounting enabled The "Whizbang" to traverse 360-degrees due to the brackets being fitted directly to The Turret (as opposed to The Chassis).

The T-40 was slated for deployment to Europe during The Normandy Invasion, but it was not deployed. Some were used in The Ardennes Offensive against Germany. Most T-40s were conversion kits, of which 1,000 were sent Overseas – but never installed. Some were sent to The Pacific War, but we’re largely ignored. The T-40 was similar to The M-34 Rocket Launcher (nicknamed The “Calliope”), which was used by The US Marine Corps with greater success. They were discontinued after The War in 1945. 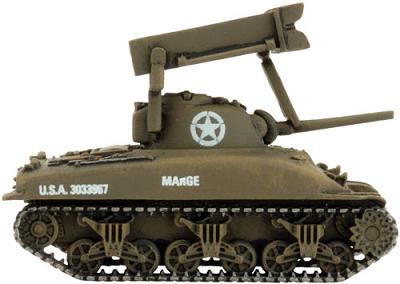