The ''concept weapon'' of The US Office of Strategic Services (OSS) – which was the precursor to The US Central Intelligence Agency (CIA), The T-13 Hand Grenade was seen as a departure in tradition hand explosive devices. Developed late in World War II (1943), the exact numbers of production and deployment were destroyed (as they were considered ''Classified''). Very few T-13 Devices have survived. The Devices were Baseball-shaped, with the mindset that most American Men were more comfortable with throwing such a shape. Due to this design, accuracy and distance were normally enhanced. The detonation method was somewhat complex, in that a Soldier placed an attached nylon string (placed on the finger). The first activation pin or primer was pulled with the Soldier throwing the T-13.

The nylon string was then pulled or ''yanked'' when the T-13 was at target. The amount of pressure was so sensitive that it did not effect trajectory in any way. Devices ranged from 5 to 12-ounces in weight.
The Device differed in that most traditional Hand Grenades optimally exploded above a target (although most exploded when then hit the ground). The nylon triggering was seen as a way to ensure air detonation. With a ''good throw'', ranging was put around 66-feet. The explosive charge was 9-ounces with shrapnel being the standard fragmentation dispersal.

Although envisioned for use by the regular US Serviceman, The T-13 was seen in most use with Commando and Special Services Units. A common flaw with The T-13 was the occasional accidental detonation before the nylon string activation could be deployed. They were used mostly in Europe. 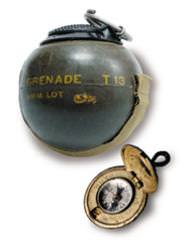