First introduced in 1949 by The Smith and Wesson Firearms Company, The Combat 15 was a .38 Caliber Handgun (also known as The K-38) with a long Service History (ending in 1999). Hundreds of thousands were produced and exported throughout The World. The Model 15 was an upgrade of The Model 10 Military and Police Version (in active Civilian and Military Service since the 1950s). While The US Army did not replace The Model 10 for use by Officers and Military Police (until the 1990s), The Model 15 was the staple firearm used by The USAF ''Air Police'' (again until 1992).

Well built with a reinforced barrel, The Model 15 used a .38 Caliber Round in a 6-Shot cylinder capacity. Weighing less than 1-lbs, a 4-inch Barrel was standard issue. Barrels and frames were Carbonized (for Civilian use) and Parkerized (for Military use). The Model 15 had a 15-yard maximum effective range. 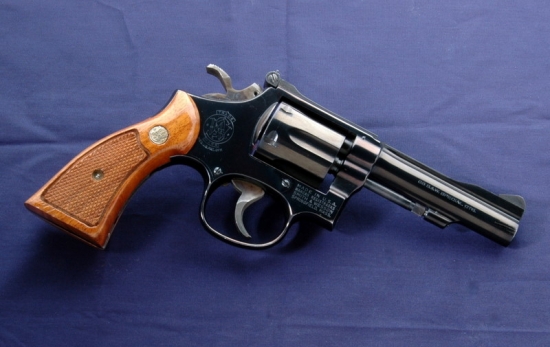