The US Model Springfield 1855 Rifle, was an innovative firearm, issued by The US Army to it's soldiers. A Percussion .58 Caliber Long Arm, it was 9-pounds and 56-inches in length. A trained Rifleman could fire 2 to 3 rounds per minute to an effective range of 200-yards. The innovation in this firearm was it's Percussion ignition system. Up to this point in development, a Percussion Cap was used to fire the black powder, which in turn propelled the lead round. This small device was a crimped brass piece, fitted to be placed onto the "Nipple", or ignition port at the rear of the barrel. When struck by the descending Hammer, a small portion of dried Nitrate (inside the Cap), would "spark" as a result of the impact. This sent the spark into the gunpowder charge.

Percussion Caps were often difficult to work with, particularly with untrained and nervous soldiers. Shaking and sweating hand could "lose a battle". Enter The Maynard Primer Tape. This method featured a rolled tape of impregnated Nitrate in raised "domes". The Model 1855 Springfield featured a recessed compartment in the Receiver, with a spool - upon which The Maynard Tape was wound. With the Nitrate facing the Nipple Port (which was modified with a striking pin, as the Hammer struck down, the spark from the Tape would ignite. Each successive "pull" of The Hammer would advance The Maynard Tape. The Tape (although clever)  would misfire often, causing the Model to be re-fitted back to the standard Percussion Caps, once again. However, the clever design did not "die". In the early 20th Century, The "Cap Roll", was an integral part of every Boy's "Toy Cap Gun". 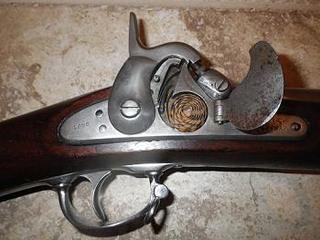