Perhaps one of the first examples of an early “Cruise” Missile System, The US developed SM-62 “Snark” was first deployed by The US Air Force’s Strategic Air Command in 1958. The System was named for the “indescribable Creature” written of by English Fantasy Writer Lewis Carroll. Although eventually made obsolete by Nuclear Defensive System advancements, The “Snark” was The USAFs first long-range Surface to Air, Guided Missile deployed Worldwide. Unlike The “Nike” Defensive System, The SM-62 was seen as a practical Nuclear Delivery System to counter The Soviet Union. Sub-Sonic in design, The SM-62  solid-fuel Missile System that used (3) Jet Engines for propulsion. The Twin Aerojet Boosters were capable of 10,500-pounds of thrust with the Single Pratt & Whitney J57 capable of an additional 130,000-pounds of thrust. A “Snark” was roughly 70-feet in length. It’s 40-foot “wings” were “swept back” and for stabilization purposes. It could achieve a 600-mph airspeed and had an operational range of 5,500-miles. The SM-62 was armed with The W39 Tactical Warhead which produced a 3.8-Megaton yield.

Strictly a Mobile-based launching Systems, The SM-62 used complex, on-board Celestial Navigation Micro Chip components which were of the utmost Secret in nature at the time. Because of the overall expense of the System, The “Snark” was re-usable. In other words, after deployment of it’s Warhead, The SM-62 could be “flown” back. Launch to Deployment and subsequent retrieval took 11-hours. Although much of the operational History of The “Snark” contains both good and bad operational pieces, little is still known of the overall success of the program. (2) full SM-62 Commands did exist between 1958 and 1961, with 30 operational Missiles. By 1961, The “Snark” was deactivated in lieu of advanced Nuclear weapons systems. Only (5) are still known to exist in Museums. 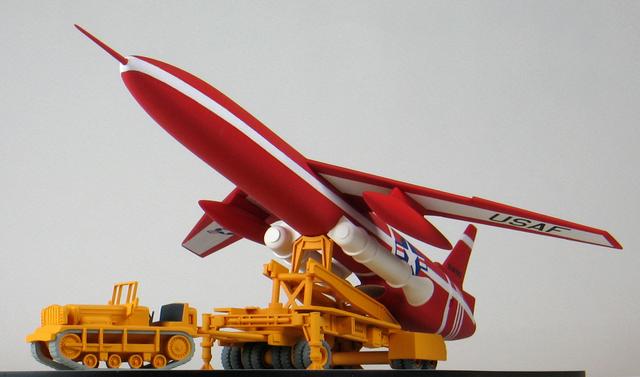