Also known as The ''Pluto Rocket'', The US designed Supersonic Low Altitude Missile (SLAM), was first conceived in 1955. The basic theory, was to create a ''Ramjet'' platform capable of high speed delivery of a thermo-nuclear device (payload). The SLAM was widely shown to The World as a component in The US ''Mutual Assured Destruction'' Plan (aimed at any Enemy that dared to attack The US with Nuclear Weapons). With Ramjet technology advancing rapidly due to the need to keep up with Aircraft (Jet) evolution, the need to develop a viable Missile delivery system for such aircraft was crucial. SLAM was a ''first attempt'' to do this.

A containment for a 60-inch reactor was needed for the initial power plant for SLAM. Designs created could contain the 59-kilograms of Uranium needed for sustained flight. 600-megawatts could be provided with ease. A rated airspeed would have peaked at Mach 4.2 with a maximum altitude of 30,000-feet. Stabilized by a fixed swept-wing configuration, at least 30-feet would have been needed. The length of The Missile is speculated to have been around 40-feet. Deployment would have been achieved by Heavy Long Range Bombing platforms such as The Stratofortress. Cost overuns would cancel The Pluto Project in 1964 for the further development of ICBM Programs already in use. 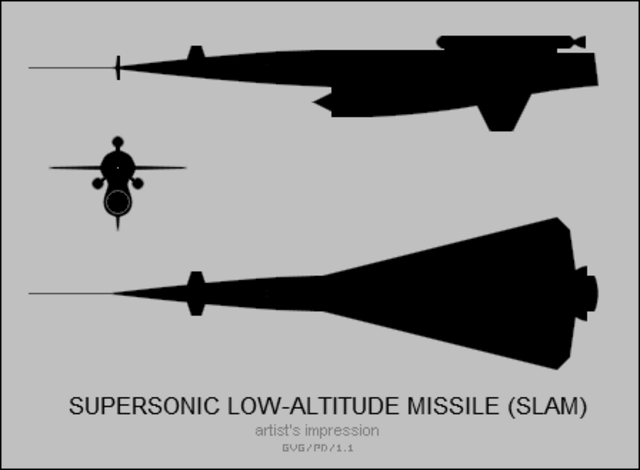