The US Savage Arms Model 1907 .32 Caliber Semi-Automatic Pistol, was a rival to Colt's marketing of the later 1911 .45 Automatic Pistol. Open Contracts in 1907 by The US Army were aimed at producing the first effective automatic pistol for use by soldiers. The Savage was a close contender to Colt's .45 (which ultimately got the Contract to to the heavier round). Some models were seen in use by France during World War I, but The Model 1907 did not see much use thereafter. Weighing 19-oz, The Model 1907 was 7-inches long and used a .32 Caliber round, deployed via a clip inserted into the handle (frame). Gas operated (expelled from exploding cartridges), the Model 1907 had a maximum effective range of 200-meters. 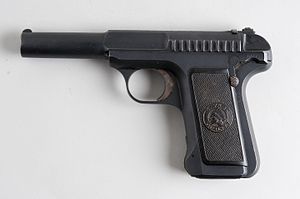