The ''Verijet'' was an experimental Aircraft produced by The Ryan Aeronautical Company in 1955. The craft was designed in response to The US Military need for a vehicle capable of take-off and landing in very closed locations. The vehicles also needed to incorporate the then latest in Jet Aircraft technology. Many Companies were competing for Government Contacts of this nature, making the 1950s a collection of often ''wild'' designs and capabilities. The vast majority of such Aircraft were never fully implemented.

The Ryan Companies ''Verijet'' was designed to launch (Take-off) very much as a traditional Rocket would. It was launched from a vertical position (upwards). After initial launch, a Pilot would use controllable engines to level out The X13 and fly the craft as a traditional Jet aircraft. Landing was also envisioned as a traditional aircraft function. 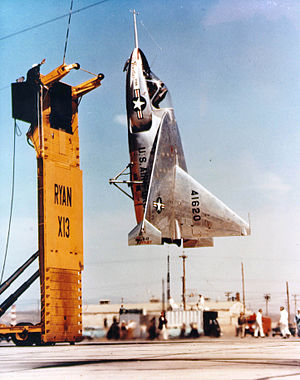