As we have seen, The American Civil War of 1861-1865, saw a rise in Patriotism - especially with the creation of many unauthorized National Flags. A type of National Flag was designed and used around 1862, that was perhaps one of the most popular displayed. This was known as The "Round" Flag. Based on the traditional design of the National Flag of The United States, it featured 7 Red Stripes and 6 White. The Upper Left Canton was a Field of Blue. The arrangement of the 33-White Stars (the remaining States of The Union), were set in a circular pattern. In the Upper 4 corners of The Canton were placed 4-White Stars. A larger White Stars was centered in The Field. Seen in use over Government Buildings and even deployed on the battlefield, briefly - The "Round" Flag would continue in use until 1867. 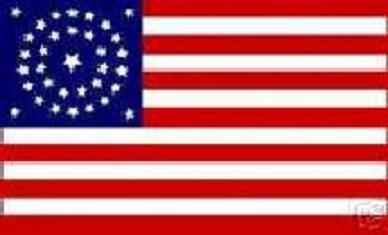