The US ''Lancer'' as developed by The Republic Aviation Company, was a fast pursuit Fighter which was one of the first all aluminum fuselage aircraft pioneered by The Company. While not popular with The US Navy, The P-43 (of which nearly 300 were produced), was sold to the fledgling Chinese National Air Force. The ''Lancer'' was noted for being one of the few Fighters capable of intercepting the dreaded Japanese Kawasaki Ki-46 ''Dinah'' Recon and Light Bomber Plane. The ''Lancer'' was very effective over the skies of China. Variants would also be adopted in small numbers by The British Royal Air Forces. Most were retired in 1944 in lieu of The F-4 ''Lightning'' Fighter Plane. Flown by (1), The P-43 was 30-feet long with a wingspan of 38-feet. Power came from a single Pratt & Whitney 14-cylinder Engine, capable of of an impressive 1,200-HP. Rated airspeed was 360-mph. Operational ceiling for The ''Lancer'' was 38,000-feet. Armament varied, but standard were (4) 12.7mm wing stationed Machine Guns. 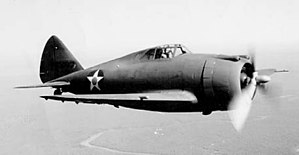