The ''successful'' swept wing variant of The previous F-84 ''Thunderjet'' Fighter, The US Air Force F-84-F in addition to it's ''new'' wing variant, it's Rear Tail (Anhedral) had a 3.5-degree configuration. It still had the same lift off problems as it's ''Cousin'' The F-84, but it's speed and air combat abilities proved slightly better. They where deployed to West Germany in support of the US Presence when The former ''Berlin Wall'' was constructed. The Fighters maintained 1,800 flight hours as a result of this Mission. It was a ''Thunderstreak'' that traveled from New York to Los Angeles in 1955 in 3-hours and 44-minutes. The F-84F (and supportive variants) were retired in 1971, but many where exported to other Nations for use in their Air Forces. The last known user was Rwanda in 1990.

Piloted by (1), The F-84F was 44-feet long with a swept-wing configuration length of 34-feet. They were powered by a single Wright J65 Turbojet Engine, capable of producing 7,200-IBF of Thrust at an airspeed of 690-mph. Operational ceilings were rated at 46,000-feet. Armament varied, but included (6) .50 Caliber Browning Machine Guns (wing mounted, 3 on each wing) and multiple Ordnance packages of 6,000-pounds. The ''Thunderstreak'' was alos designed to support a tactical Nuclear Device. 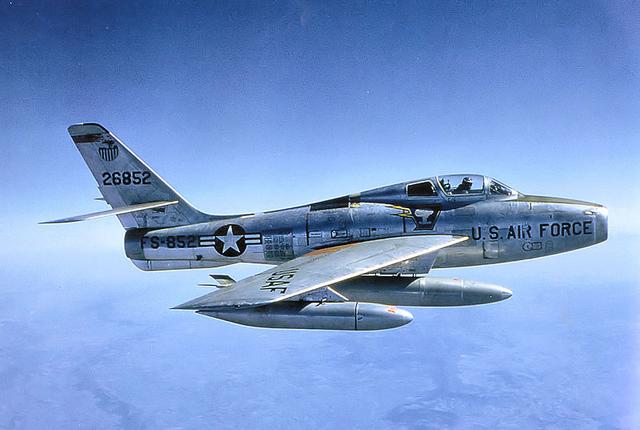