The Remington Arms Model 1860 .22 Caliber Derringer – also known as The ''Zig Zag'' (for it's barrel rotation when fired), was a double-action handgun, which gained some popularity as a ''personal defense'' weapon, marketed to Soldiers in The Union Army (during The American Civil War of 1861-1865). It was small enough to be carried in a pocket or sack. The Gun consisted of (6) 3-inch Barrels, into which was load the .22 (Short) Ammunition Round. Seen as a crude version of a ''rotating'' Barrel System (which turned to another loaded Barrel upon discharge of the previous shot), this gave the Shooter six changes to ''defend themselves'' once they expended their Military issued firearms. A ''Novelty'' weapon which sold to both Officer and Enlisted, only 1,000 were claimed to have been sold. Range of the weapon was listed at 500-feet. However, although not longer produced by the end of 1862, The ''Zig Zag'' would be carried by many soldiers throughout The War. 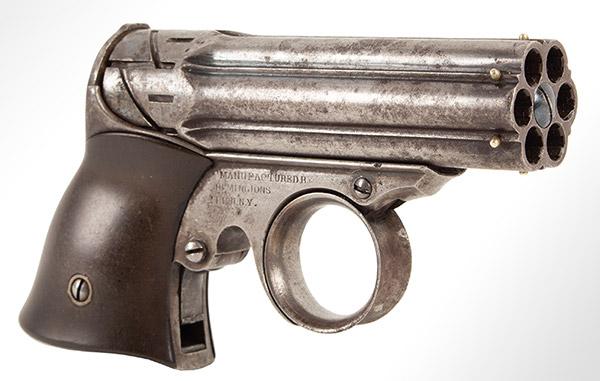