US Regiment of Mounted Riflemen

The Regiment of Mounted Riflemen was a US Army Military Unit, raised at Jefferson Barracks in Missouri (1846). The Unit was mustered specifically to participate in the (then) recently declared Mexican-American War of 1846-1848. Their name ''Mounted Riflemen'' differed from the currently serving Dragoons. The Mounted Rifles used their Mounts to move from point to point on a battlefield. They would dismount and fight (using their horses for transportation). Seldom did The Mounted Riflemen ''fight from The Saddle'' (as did Dragoon and traditional Cavalry).

Sent along with General Winfield Scott and The US Army on The Mexican Campaign, The Regiment fought in almost every major engagement. Their Regimental Colors would be flown from the balcony of The Mexican National Palace (1847). It was here General Scott gave them their immortal nickname ''The Brave Rifles''. Still active after The War, The Mounted Rifles were deployed to Oregon Territory in 1851 (with several Companies sent to Texas to fight The Comanche (Native American). The Regiment would also encounter The Apache and Navajo.

With the start of The American Civil War of 1861-1865, The Regiment was renamed The US 3rd Cavalry Regiment. Sent to New Mexico Territory, The 3rd was instrumental to Federal Forces at the Battle of Glorieta Pass (in which The Confederacy attempt one last time to capture The Territory for their ultimate goal – the taking of The Gold Mines in California). Later, The 3rd was assigned to The Army of The Tennessee (fighting at Chattanooga, Tennessee and capturing Little Rock, Arkansas). After The War, The Regiment was again sent after The Apache Tribes under War Chief, Geronimo. In 1876, The 3rd participated in The Great Plains War against The Sioux (fighting at The Battle of The Rosebud in 1876).

The 3rd would fight in The Spanish-American War and was part of the line which assaulted San Juan Heights (1898). After Cuba was secured, The 3rd was sent to fight in The Philippine Insurrection (1899). They fought in over 60 skirmishes against the Enemy. The Regiment would continue in serving in America's Wars (only now losing it's horses for Armored Vehicles and Tanks) . World War I, World War II (under famed General George Patton), Korean and The Vietnam Conflict.

They still continue to serve, having fought in The Middle East since the start of The Global War on Terrorism (21st Century). 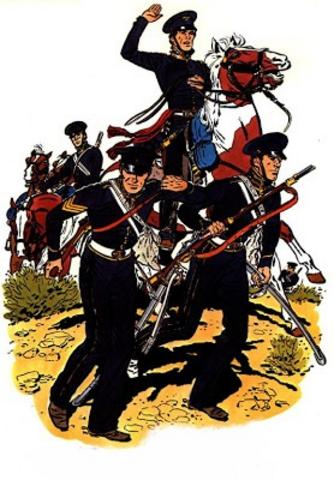