An experiment design pattern from 1957, The ''Pye Wacket'' Air to Air Missile System was a lenticular (disc) shaped munition was planned as a defensive device deployed from short lived B-70 ''Valkyrie'' Strategic Bomber. The design for the munition (disc-shaped), was odd, but somewhat practical. Given the extremely high-altitude of deployment (75,000 + feet), the shape was seen as a realistic alternative to cylindrical Missiles.

Begun in 1958, The ''Pye Wacket'' Program (as a ''Top Secret'' Project) it's name was Code – only several prototypes versions existed. The Missile (designed for use from a high altitude and extremely fast aerial platform) weighed 510-lbs each. Overall diameter was 70-inches. Each carried 55-lbs of HE. (3) solid fueled Rockets produced a thrust of 10,200-IBF each. Each ''Pye Wacket'' could achieve airspeeds of Mach 6.5+. Infrared homing (heat seeking) thermal was used for targeting. Operational Ceiling was rated at around 77,000-feet. In 1961, when ''Valkyrie'' as a Strategic Bomber was canceled, so too was ''Pye Wacket''. It was determined that existing high-altitude ICBM Defensive Systems would serve much better. 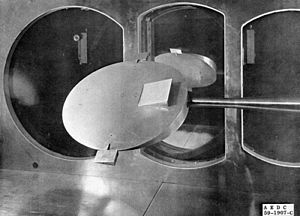