The Northrup F-89 ''Scorpion'' Interceptor Fighter was a 1st Generation Jet Asset. It is considered the first Jet powered Interceptor to enter active service in that role in The US Military. In addition, The ''Scorpion'' was the first Jet Fighter to carry Nuclear Armament (The ''Genie''). Over 1,000 Production Models were deployed beginning in 1948 until 1950. It was also one of the most costly to develop, garnering between $800-$900 Thousand USD. (13) Variants were developed for USAF usage. Crewed by (2), The F-89 was 54-feet in length with a non-swept wingspan of 60-feet. The Interceptor was powered by (2) Allison J35 Turbojets (afterburning), and produced 5,400-IBF Thrust. The maximum airspeed was 645-mph, with an operational ceiling of 50,000-feet. The ''Scorpion'' could range 1,300 nautical miles.

The unique weapons deployment package of The F-89 placed it's primary Missile systems in Wing ''Pods'' located at the tip of each wing. This was the only US design to use this deployment package. Conventional weapons packages included (6) 20mm Cannons, (16) 5-inch Rockets, Multiple Pod Systems carrying (104) 5.75-inch ''Mighty Mouse'' Rockets. The later ''D''-Class Interceptor carried (2) ''Genie'' Tactical Nuclear Warhead Missiles. The F-89 was also the first tactical (training) deployment of a Jet Fighter launched tactical Nuclear Device, during ''Operation: Plumbob'' – in 1957 (New Mexico).

With rapid advances in both Nuclear devices and Jet Fighter technology, most F-89 were removed from Active Service and deployed with State ANG Units. These would remain until 1969, when all were decommissioned. Several static Models still survive today in The United States. 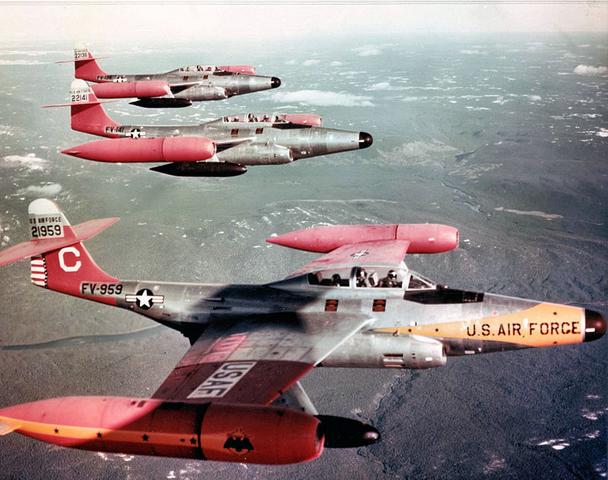