Designed in 1935, The North American “Texan’’ Fighter Plane was a popular Trainer and Fighter, used by The US Army Air Force and many other Nations. The popularity of The “Texan” as a Training Plane would last well into the 21st Century (although it was discontinued for Military Training in 1970). Well over 15,000 were produced for The World War II American effort. As a Medium Fighter, The T-6 was effective in “Dog Fights” with the vaunted Japanese “Zero” Fighter. The American Fighter was seen in use in The Pacific Theater of The War primarily. After World War II, many surplus “Texans” found their way into the fledgling Syrian Air Force and many South American Countries Military Services as well. Crewed by (2), The “Texan” was 30-feet long with a 43-foot Wingspan. Powered by a single Pratt and Whitney “Wasp” Radial Engine, capable of 600-HP with top air speeds of slightly over 200-mph. The Fighter’s operational ceiling was rated at 24,000-feet. When configured as a Fighter (as opposed to a Trainer), The “Texan” supported (3) .30 Caliber Wing and Nose Mounted Machine Guns. 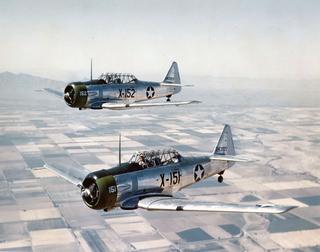