The iconic nicknamed "Mustang", The P-51 Fighter was envisioned as a replacement for Great Britain's "Spitfire" Fighter. Orders for 100 were placed in 1940. The prototype performed well in Trials and was looked to by The US Army as well. A single-seater Fighter, The P-51 was 32-feet long with a 37-foot wingspan. It was capable of airspeeds of 387 mph with 1,200 HP. The original operational ceiling was 35,000 feet.

Armed with (6) fixed .50 Cal. Browning Wing Machine Guns. The "Mustang" was also able to carry up to 2,000-pounds of underwing munitions. Deployed to both European and Pacific War Theaters, it was soon determined that The P-51 had maneuverings issues above 17,000 feet. For this reason, it was considered a "Medium" altitude aircraft. British Models were upgraded to allow for operational heights of 42,000 feet.

The "Mustang" was made famous by several incidents. Future American Jet Test Pilot Chuck Yeager (who would go one to verify the speed of sound with The XM-1), flew Mustangs against Germany's Luftwaffe - including 12-kills (2 of which were Me-262 Jets). Next, The P-51 was the primary Fighter of The 332nd Fighter Group (the first African-American Fighter Pilots of World War II).

They too scored high kill ratios against The Luftwaffe (including several Fighter Jets, as well). The P-51 served well in Europe, also being credited with maintaining air superiority over North Africa, The Mediterranean and Italy. The "Mustang" would continue as a Fighter with many other Countries Air Forces well after The War. The last P-51 was decommissioned from The Dominican Air Force in 1984. 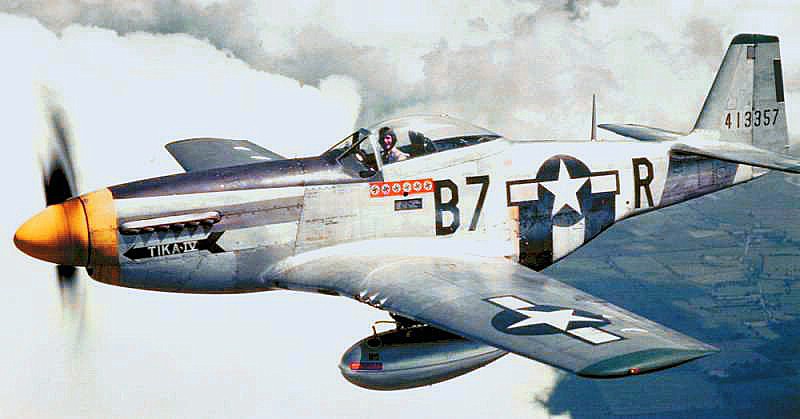