The initial concept of a Countrywide Missile Defense System actually developed out of the rapid development of The Jet Aircraft on the mid-1940s. It became all too well seen that conventional Artillery or related Anti-Aircraft Arms were not very effective (given the extreme speed and attitude that these Fighter Planes and Bombers could – and were achieving). The majority of Ground based rocket defense methods were still “primitive” at best. With much taken from captured Nazi German Scientists after World War II by The Allies. Missile and Rocket Technology advanced by great leaps bounds, in both Space exploration and of course Military applications.

Both during and after The Korean War of the 1950s, one of the greatest defensive-offensive advances made was in Atomic Power. Conversely, so too was one of America’s first Missile Defense Systems – known as The “Nike”. Related to The Greek Goddess of “Victory”, The Nike Defense System included roughly (7) operational Missile Systems which were positioned at strategic locations throughout The United States (primary The Eastern and Western Coasts). These Systems were called: The “Hercules”, The “Hawk”, The “Sergeant”, The “Spartan”, The “Pershing”, The “Lacrosse” and The “Ajax”.

The development of The Nike Systems was in part stationary facilities (near major Cities) and Mobile deployments. The System was ran primarily by The US Army, with The USAF taking over during the last remaining years. The Nike was the precursor to America’s Strategic Nuclear Defense System – better known as The “Minuteman”.

The Nike Systems were basically twin staged, solid fueled Rockets, each having different operational capabilities. The average airspeed of a Nike Rocket was around 1,000-mph with a maximum operation apogee or height before reentry/strike range of 70,000-feet. This gave the typical Nike System roughly a 500-mile range to intercept.

Around 1965, The Soviet Union began an all-out increase in the development of it’s Intercontinental Ballistic Missile Program, to include Mobile and Stationary Deployments. The Nike System was never designed to counter the more powerful Rocket, and The Nike System was soon replaced by America’s own Deterrent Force. Although, many Nike Units were re-classed as “Coastal Batteries” – they stayed active as such until the early 1970s. Some of these variants were Nuclear capable. In Europe, by 1975 – all Nike Mobile Batteries were de-commissioned by NATO. Modern variants such as The “Patriot” and even the more recent “THAAD” Systems are “Grandchildren” of this Defense System. 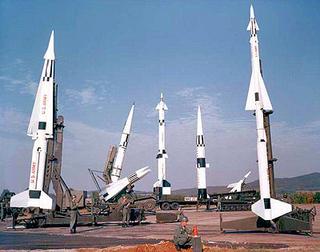