Known as ''The Jolly Rogers'', The US Navy's Strike Fighter Squadron 103 (VFA-103) are a US Navy Combat Asset, currently assigned to The Oceania Naval Air Station (US State of Virginia) and at Sea with US Navy Carrier Air Wing 7 (which features The Aircraft Carrier, USS ''Abraham Lincoln''). First formed in 1952 as ''The Sluggers'', they became ''The Jolly Rogers'' in 1995. They are identified on their primary Fighter Jet, The F-18F ''Super Hornet'', by an all-Black Tail Fin with the iconic White Skull and Crossbones (the Pirate Insignia of ''The Jolly Roger'' from the 18th Century). The Squadron identification Color (Stripe) is Gold. Deployed to The Lebanon Crisis of 1958, The ''Rogers'' would serve with distinction during The Vietnam War of 1965-1975. A ''Roger'' Fighter became the first and only US Navy Fighter to shoot down a Soviet MIG-21 at night (thanks to it's advanced Electronic Avionics).

VFA-103 also participated in the interception of The Egyptian Boeing 737 which carried the Hijackers-Terrorists who took The Greek Flagged Passenger Ship ''Achille Lauro'' in 1985. Forcing The Airliner to the ground in Italy (Sicily), The Terrorists were then taken into custody. The ''Rogers'' would go on to serve in Operation ''Desert Storm'' (1990s) and the later Gulf War (2000s). Their most recent engagement was Operation ''Inherent Resolve'' in Syria (2016). 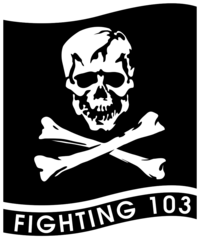