Known as ''The Sundowners'', US Navy Fighter Squadron 111 was formed during World War II in 1942. Based at naval Air Station, North Island, California, They would eventually be armed with The F6F ''Hellcat'' Fighter Plane and deployed with The USS ''Hornet'' Carrier Battle Group. The Squadron is credited with shooting down 55 Japanese Fighters during The Battle of Guadalcanal (1942). After The War, ''The Sundowners'' would be reassigned to The USS ''Valley Forge'' Carrier Battle Group (1948).

While several Fighters were deployed with The USS ''Philippine Sea'' Battle Group, during the opening stages of The Korean War (1950), a ''Sundowner'' using a F9F ''Panther'' Fighter Jet, is credited with the first ever MIG-15 ''Kill'' (Jet to Jet Combat). The Squadron would participate in several Air Operations in the skies over Korea.

Although deactivated in 1959, ''The Sundowners'' would be reactivated in 1965. The Squadron served on most US Carrier Battle Groups during The Conflict and participated in almost every major Air Operation of The War.

The Squadron was deactivated in 1995. A resurrected ''version'' of ''The Sundowners'' was deployed in 2003 as VFC-13 Fighter Composite Squadron (consisting of several deactivate Fighters Groups, now merged. 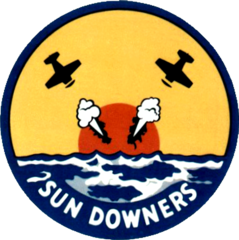